The Green Group's position on the IHRA definition of antisemitism

A resident contacted me this week asking why the Green councillors refused to support Labour's motion on antisemitism that was passed by Bradford Council (with Tory support) at our July meeting.

Our full amendment (which did not, unfortunately, attract all-party support) is below and is self-explanatory. Our UK Green MEPs took a similar approach when the European Parliament recently adopted the IHRA definition of anti-Semitism.

Everyone is also welcome to watch my colleague, Cllr Martin Love, explaining our position to the meeting here on the Council webcast: 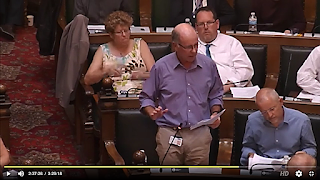 
Bradford Council is deeply concerned by the rise in hate crime and racism across the UK, including the rise in antisemitism in recent years.
Council notes that the International Holocaust Remembrance Alliance (IHRA) adopted the following definition of antisemitism in May 2016: “Antisemitism is a certain perception of Jews, which may be expressed as hatred toward Jews. Rhetorical and physical manifestations of antisemitism are directed toward Jewish or non-Jewish individuals and/or their property, towards Jewish Community institutions and religious facilities”.


Council notes that the House of Commons Home Affairs Select Committee published a report on antisemitism in the UK in October 2016 which: (a) emphasised the “importance of establishing an agreed definition of antisemitism”; (b) went on to “broadly accept” the IHRA definition; and (c) recommended that the adoption of the IHRA definition by the British government, law enforcement agencies and political parties needed to include “two additional clarifications to ensure that freedom of speech is maintained in the context of discourse about Israel and Palestine, without allowing antisemitism to permeate any debate”.
Council notes that the Home Affairs Select Committee’s two clarifications were: (a) “It is not antisemitic to criticise the Government of Israel, without additional evidence to suggest antisemitic intent”; and (b) It is not antisemitic to hold the Israeli government to the same standards as other liberal democracies, or to take a particular interest in the Israeli Government’s policies or actions, without additional evidence to suggest antisemitic intent”.


Council notes that the UK Government subsequently signed up to the IHRA definition of anti-Semitism, but without the two caveats recommended by the Home Affairs Select Committee.
Council notes that, in March 2017, Hugh Tomlinson QC (Matrix Chambers) provided a ‘Counsel’s Opinion’ on the government’s decision to adopt the IHRA definition of antisemitism in this way on behalf of four campaign organisations (Free Speech on Israel, Independent Jewish Voices, Jews for Justice for Palestinians and the Palestine Solidarity Campaign).


Council notes Tomlinson’s detailed six-point conclusion, which reads as follows:
1)   The IHRA “non-legally binding working definition” of antisemitism is unclear and confusing and should be used with caution.


3)   The Government’s “adoption” of the IHRA Definition has no legal status or effect and, in particular, does not require public authorities to adopt  this definition as part of their anti-racism policies.


4)   Any public authority which does adopt the IHRA Definition must interpret it in a way which is consistent with its own statutory obligations, particularly its obligation not to act in a matter inconsistent with the Article 10 right to freedom of expression. Article 10 does not permit the prohibition or sanctioning of speech unless it can be seen as a direct or indirect call for or justification of violence, hatred or intolerance. The fact that speech is offensive to a particular group is not, of itself, a proper ground for prohibition or sanction. The IHRA Definition should not be adopted without careful additional guidance on these issues.


5)   Public authorities are under a positive obligation to protect freedom of speech. In the case of universities and colleges this is an express statutory obligation but Article 10 requires other public authorities to take steps to ensure that everyone is permitted to participate in public debates, even if their opinions and ideas are offensive or irritating to the public or a section of it.


6)   Properly understood in its own terms the IHRA Definition does not mean that activities such as describing Israel as a state enacting policies of apartheid, as practicing settler colonialism or calling for policies of boycott divestment or sanctions against Israel can properly be characterized as antisemitic. A public authority which sought to apply the IHRA Definition to prohibit or sanction such activities would be acting unlawfully.


Council therefore:
1)    restates its total condemnation of all forms of racism in all its manifestations, including antisemitism;


2)    requests that the Corporate Overview and Scrutiny Committee conducts a detailed review of the options for adopting a clear, robust definition of antisemitism that will enable Bradford Council to ensure that (a) everything possible is done to end the scourge of antisemitism in our society, while (b) also ensuring that our fundamental right to freedom of expression is properly protected.
Posted by Bradford Green at 02:43